Sometimes one does crazy things.

I’m not a follower of football, but I had to watch the Euro Final. My excuse: ‘People will talk about it, so I need to know what happened.’

I hadn’t the nerves to sit calmly through the whole game, but I did see the penalties. My heart went out to the players who didn’t score. I don’t know how these young men have the guts to come up for their kick, or how they cope afterwards if pressure gets the better of them and the ball doesn’t go where it went every single time on a hundred practice runs.

Friends told me later how they realised the moment they saw by whom England’s last three penalties were taken that there’d be trouble if the ball didn’t hit the back of the net. ‘I knew instantly,’ wrote Bukayo Saka.

I left it too late to write in the press how passionately our community is opposed to racism and how deeply we feel solidarity with these courageous players. But I had to do something. On Tuesday evening the feeling grabbed me that I had to show my respect by going to the mural of Marcus Rashford, disgracefully defaced the previous night. Minutes later I was on the road.

I got to South Manchester around 2.00am. I chatted with the one other person there. ‘I needed to be here,’ he said. We added our messages to the outpouring of love which the wall had by now become.

Before I’d set off, I’d phoned Rabbi Weiner for advice: ‘Is this crazy?’ His answer was great: ‘Yes. But sometimes we need to do crazy things.’

I’m glad I went. My reasons are obvious, but here they are:

If we let racism pass without showing our face, we’re the silent majority who’re assumed to condone it.

That’s true, whoever the victims. But these footballers are true moral heroes. Through these bleak lockdowns, it’s Marcus Rashford who lifted our spirits by insisting children who needed them got free school meals, including during the holidays. He made the government think again; he showed how one person can make all the difference. He’s our nation’s conscience, and he’s not the only one in that England team. 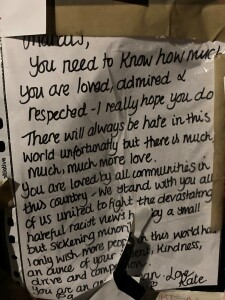 There’s something personal as well. My parents were thrown out of Germany by Nazi racism. Out of loyalty to my family, I had an absolute duty to protest the abuse to which these footballers were so vilely subjected.

I went in the name of my community and everything Judaism stands for. In my head was the phrase sinat chinam, ‘causeless hate’. This Sunday is Tishah Be’Av, the fast when we remember the misery destructiveness brings. The rabbis blame the burning of the Temple on just such causeless hate, which brings only misery as hate always does.

Causeless hate is only overcome by ahavat chinam, causeless love. That’s why, of all the messages pinned on that Manchester wall, one stood out, signed simply by Kate:

There will always be hate in this world unfortunately but there is much, much, much more love.

Where do we go now? For sure we must stand alongside the victims and potential victims of racism and bullying. Race hate must be challenged. Social media platforms have work to do.

But is there something more?

Sinat chinam is usually translated as ‘causeless hate’ but ‘pointless hate’ explains it better. Hate gets us nowhere, but does it always come from nowhere? It’s certainly not the fault of those it targets. But are there cruelties and injustices in our world which pour their poisonous fertilisers on the soils which make hurts grows into hates? Ahavat chinam, causeless love, needs to consider this too.

Meanwhile I wish I could give Marcus Rashford a hug and tell him he and his colleagues are heroes of our heart and conscience.