Because the rabbis said ‘Be happy when the Hebrew month of Adar begins’; because last week (and often) I’ve written on painful subjects; because people are – rightly- thinking about coronavirus and how to take sensible precautions; for all these reasons I’m going to focus on what brings many of us more joy than virtually anything else: the young flowers of the coming spring. Hopefully there’s a park, a garden, a city square, a row of trees, even a window box nearby for us to see the crocuses and daffodils.

The Hasidic teacher Rebbe Menachem Nachum of Chernobyl notes that we read in the Torah about the making of the Tabernacle at the beginning of Adar. ‘Make me a holy place and I will dwell among you,’ says God. ‘A-dar,’ the rebbe explains, is composed of the first letter of the Hebrew alphabet, aleph, which symbolises God; and dar, which means dwell. It’s the month when God says, as it were, ‘I want to live with you. I’m near you, next to you; move over and give me some space.’

And where is God to be found more than in a garden, a park or among the hills and forests?

So please follow, along the path into the ordinary glory, so ordinary I literally don’t notice it many mornings. Here are the last of the snowdrops, their bells pure white, soon to retreat into their tiny bulbs and await underground until the January darkness calls them up to harbinger a new season. 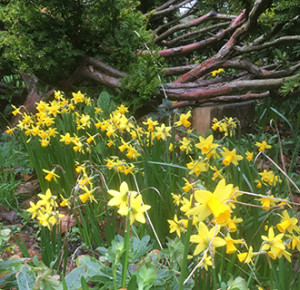 Here are crocuses, purple sentinels. Here are the daffodils with their bright yellow grace, and narcissi with their scented, many-headed flowers. There are early-bird December daffodils and late-comer May daffodils and there are ‘midwinter-spring’ February daffodils. But, most of all, there are ‘we love March and April’ daffodils, bringing joy when the mornings are once again light and the air smells of sweet rich grass and growth. 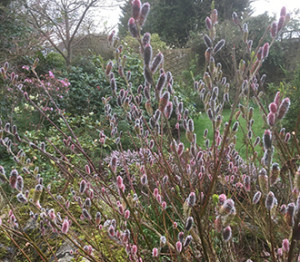 It’s near to the close of the catkin season. ‘Touch them,’ I was t

old as a child and I still remember my fingers being guided onto the soft silver of the willow-buds. Only silver? There are black willow catkins and pink willow catkins. The hazels and the alders have their catkins too, like tassels, yellow with dust-fine pollen.

More secretive are the primroses, 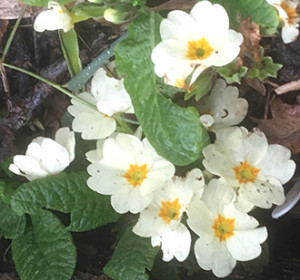 hiding in the hedgerows in the countryside, thriving in semi-dark corners in the gardens. The wild kind are my favourite, not gaudy orange, but cream; simple in their single flowers, modest like the snowdrops, their wake-up-early neighbours.

I’m glad when I see the birds among the branches: blackbirds, ground-feeders, hopping down from a twig onto the grass; a wren on a stone; the air thick with the to-and-fro traffic of the blue-tits by the seed feeder, defying an upside-down squirrel; the sparrows making a modest comeback, bringing hope that other species too may one day return if we care for and protect them as we should.

These are all just small things. But they’ve changed my attitude. I used to think that the world was for me, for us, we human beings. Now I feel that I belong to the world, that I’m part of its far wider and deeper, incomparably richer and more nuanced communion of which I only understand a very tiny portion.

In the depth of it, in its music, and in the silence beyond the music is, A-dar, the presence of the God who dwells here, the life-giver of all things, wonder and the source of wonder.