I had two unusual prayer experiences yesterday, even three. It wasn’t that I was ‘seized by the spirit’; or perhaps, in a very quiet way, I was.

Prayer has always been to me first and foremost about connection, about bringing my consciousness home. Like most of us, my mind is full of plans, worries, questions, wants and don’t wants. When I pray, I hope to let go of all that, even if only for the shortest of time. I hope that God, life’s spirit, will enter me like water from an unquenchable source creeping, seeking its way rivulet by rivulet, back up a river bed which has become dried out. I hope to be reunited, even for mere seconds, with the vastness and wonder of life, and made silent.

I was in Israel yesterday morning, in Tiveriah. I found a path to the fields and said shacharit, the morning service, next to brilliant blue cornflowers growing among the wheat, my prayers accompanied by the white caper blossoms with purple stamens of which the Talmud speaks. There’s teaching in the simplicity of their grace; it’s good to be humbled by such beauty.

I hadn’t realised that there were to be more prayers later that morning. I’d been invited to Israel participate in a Catholic Jewish encounter, as a guest at the Domus Galilaeae of the Neocathecumenal Way. The ‘house’, a place of prayer, retreat and service, is situated on the Mount of Beatitudes. Jewish participants, largely orthodox, including representatives of Israel’s chief rabbinate, were warmly welcomed. This Christian group appreciates its deep roots in Judaism, profoundly regrets the Church’s history of persecution and sees in Jewry an essential partner in maintaining our spiritual and moral heritage. We joined them for shared prayers, consisting overwhelmingly of Psalms.

They sung Psalm 150, the Halleluyah Psalm, in a multitude of voices. Then they sung their own composition of Shema Yisrael, repeatedly affirming the oneness of God as the foundation of faith. The Cardinal of Perugia preached quietly about respect and love as the foundation of shared ethics, including the love of nature, animals, people different from ourselves.

I was moved by the singing and these gentle words. Having listened to many of the people around me, I know they spend their lives working amongst the poor, the destitute in the slumlands surrounding the wealthy core of the world’s big cities, that they lead profoundly dedicated lives amidst very difficult conditions. I thought of the words: ‘Open my heart through your Torah, your teaching’: we can learn about God’s presence from people of our own faith, other faiths, and no faith, and from nature itself. Life and its spirit flow through all things, in different ways but from the same infinite source. Moments when that oneness touches us are special; they penetrate the heart and retain the power to speak to us even years later and purify our lives.

On the way home from the airport close to midnight, the cab driver, a Muslim man originally from Afghanistan whom I had met a couple of times before, and I found ourselves deep in conversation about prayer. ‘I feel not right with myself when I don’t pray during the day’, he said. I agreed: ‘It’s as if there’s something missing, as if I haven’t been in touch with truth, haven’t been washed clean by life, or listened with my soul.’

Perhaps the deepest prayers are less about what we say than what we hear and how that speaks to us in our heart. 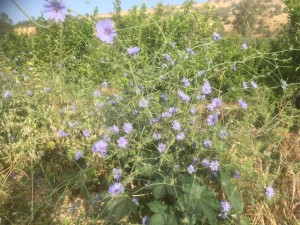