‘Do you often take trees for a walk?’

‘Yes,’ replied the man who was wheeling our community’s recently acquired ancient olive tree on a fork-lift trolley from the lorry. ‘Very popular, olive trees.’ 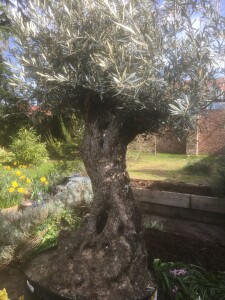 The tree, between 100 and 150 years old and raised as a semi-bonsai so that it grows gnarled and small, now sits in our synagogue gardens. It will be our testament, our living memorial to this plague year, these lockdown months. No wording has been agreed, but I think we’ll commission a plaque with an inscription something like:

For our losses and our sorrows,
our resilience and new growth.

For, according to rabbinic legend, when the olive tree was challenged as to why it wasn’t weeping over the destruction of Jerusalem long ago, it replied: ‘Can’t you see? I’m silently eating my heart out.’ Indeed, ‘our’ tree has such a gnarled and wizened trunk, with just such a hole in it.

Yet olives are extraordinarily resilient. ‘Cut down a tree and it can regrow,’ says Job in his distress, wishing human life was as capable of restoration. Maybe he was thinking of olive trees; they have extraordinary powers of regeneration.

Furthermore, when the thunder clouds come and the olive’s grey-green leaves are blasted by the wind, their undersides are revealed, shining like silver in the storm light.

It wasn’t by design that the tree arrived this week, which finds us now between commemoration of the Holocaust on Yom Hashoah and the struggle for and attainment of Israel’s independence on Yom Hazikaron and Yom ha’Atzma’ut. But the timing is apposite.

In these months in 1947 and 1948, tens of thousands out of the quarter of a million Jews who had somehow managed to survive across Europe, were quietly smuggled out of Displaced Persons’ Camps by the agents of Berichah and Aliyah Bet, escape and secret immigration. They were guided along harrowing routes across the Alps into Italy, where, from ports like Trieste, they were embarked on refitted ships to run the British blockade into Mandate Palestine and help establish the embryo state.

My father, whose Yahrzeit falls on Israel’s Independence Day, remembered how his youngest sister’s passport was taken every weekend to give to some such immigration as she struggled ashore in secret to provide a camouflage identity in case she was intercepted by the British authorities. A couple of days later it would mysteriously come back.

There can be few greater examples of resilience than this. The birth rate among Jewish survivors in the DP camps was among the highest in the world. The longing for life and future among those who had spent long years not in the valley of the shadow of death, but amidst the sight and smell of it every day, proved irrepressible.

Despite all sorrows, the ancient roots of the Jewish People fostered new growth. We mourn, and determine not just to continue, but to flourish.

Even more than an emblem of resilience, the olive tree has been a symbol of hope and peace for humankind ever since the dove laid a twig in Noah’s outstretched hand as he waited to leave the ark. God and the earth were reconciled